Quinta do Archino: lessons from Lusitanos

“You go to the mares”, Francisco told me. I had been at Quinta do Archino for seven weeks and spent no time with the mares, the mothers of his Lusitanos.  They lived in fields large enough for them to hide.  I eventually found them under a tree, swishing tails and nodding to keep the flies away.

The silence was only broken when one of the mares stamped her hoof to chase yet another fly.  I walked in a circle around them and took advantage of the shade offered by their tree. Isis was the first to approach her pink nose exploring smells in my hair, my jacket, my jodhpurs, my boots.  Another fat grey approached.  Obviously being the superior she carefully placed her open mouth across the mane of Isis to indicate that any human affection had to be shared. We stood, I scratched, they leaned into the petting.  The other mares watched and nodded the flies away.

Growing beside one mare was a thistle. She put her head down to the thistle and gently she used one of the thorns to scratch an itch on her face.  How gentle, how accurate, how knowing was this mare to show me that the point of a thorn was sufficient enough to relieve her of her itch. A lesson in gentleness, sensitivity and softness to be remembered and used when riding. 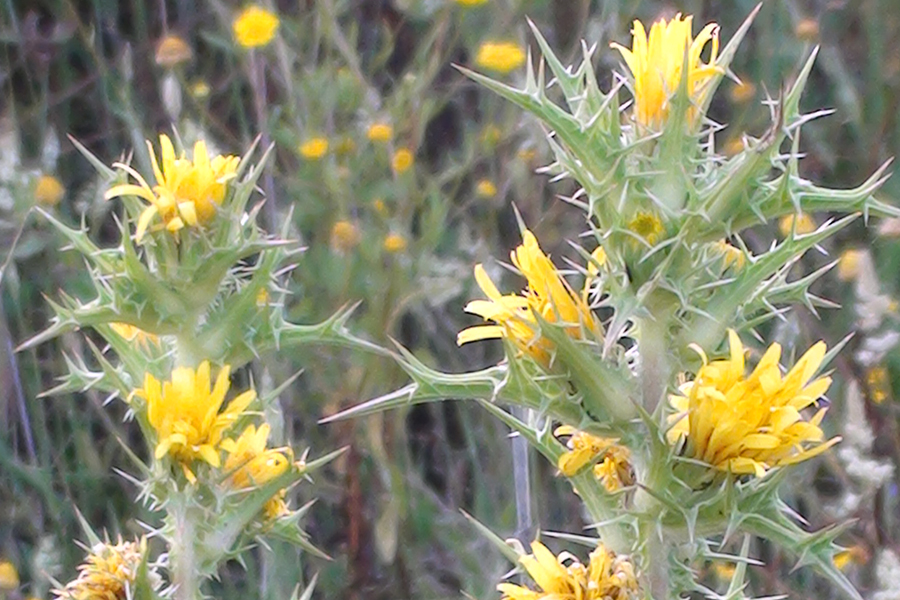 Quinta do Archino: lessons from Lusitanos

Findlay is a livery.  I call him Dr. Findlay but his companion is called Annie, not Janet.  To understand this logic you probably have to be Scottish and of a certain age!  Findlay loves his mash.  Come to think about it so do I.  The mix of oats, dried beans, corn and pony nuts in the hard feed complement the blackness of his sugar beet which combines well with the bran.  All is soaked in water. The horse makes a delicious slurping eating noise which doubles the deliciousness.

One evening I served his dinner in the out-door manger and went to lean on the fence to watch and listen to him eat.  He was joined by a pigeon who perched on the manger to peck at some stray grain.  Findlay stopped eating and nosed the pigeon off the manger.  The bird took up post close to the horse’s front legs to benefit from crumbs dropped from Findlay’s mouth. Findlay stopped eating again. He then nose shoo’ed this pigeon away with zero effect. The pigeon simply walked in a large circle with Findlay acting as an ineffective shoo’er. Both ended at the same place the story began.  The pigeon jumped onto the manger to peck at grain and Findlay buried his head in his mash. The noise made my mouth water. Harmony. I did not know that pigeon and horse shared understanding.

Just as an aside Findlay has a neighbour who is a Friesian and the sound of him eating mash could be used as an advert for the horse food company. Salivating as I write.